This page is for news and information about other Rover clubs around the world that also cater for all Rover vehicles.

In New Zealand some of the Rover Clubs are very small, some with less than 20 members. They have come together and have formed an association and have developed a web site .

To quote from their web site:

”The Association came into being about 1979 as a result of the efforts of Bob Lee in Waikato and several enthusiasts in Canterbury who modelled it on the English Association, which had been a useful organization for many years. We set up a working committee to give an umbrella organization to the NZ Rover Car Clubs, or a unified group to speak for the Clubs.” 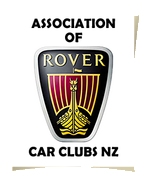 For all the information visit their web site

If you have details of other clubs that cater for all Rovers, and would like a link on this page let us know below.